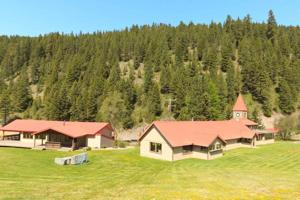 If you’ve got about $3 million on hand, a treasured piece of Missoula history is for sale: the former Marshall Mountain ski area.

Situated just seven miles northeast of Missoula in Marshall Canyon, the ski area began operation in the winter of 1941. Night skiing by kerosene flames began in 1958, and more runs were cut over the decades as snow-making capabilities extended the season.

The little hill operated continuously until 2003, when financial complications – including a property seizure by the IRS – forced owners Bruce and Kim Doering to cease ski operations.

Since then, the area has hosted weddings and mountain bike races, but the iconic pink chairlifts have been idle for more than a decade.

The lower 156 acres of the area, including the old ski school/rental building and the main lodge, are listed by Jeremy Williams of Windermere Real Estate for $2.95 million. It has been listed for about 30 days.

The long list of potential uses are what Williams hopes will capture the imagination of some plucky entrepreneur.

“It’s a great property,” he said. “The reality is that this mountain has been such a focal point and such a part of the community for so long. A lot of people learned to ski at Marshall Mountain, and there’s a large mountain biking community there.

“In an ideal world, if we had something similar there moving forward, it would be ideal. Who knows what’s going to happen next, but we would love to see it stay in the community’s hands. That’s going to be the continual focus. That would be important.”

Bruce Doering has said in the past he would rather see the site used for recreational purposes rather than “just a rich person building a house.”

The road up to the site is nearly all paved.

“It’s not too far away, and it’s just beautiful land,” Williams said. “So many people are familiar with it and it’s an iconic piece of Missoula. It’s really been encouraging the amount of interest we’ve had in a short amount of time and the potential ideas for uses.”

The top 480 acres of runs and ski lifts are owned by Five Valleys Land Trust and the Lolo National Forest.

Because Marshall Mountain historically leased the top section from Plum Creek Timber Co., that portion of the mountain was divested and acquired by Five Valleys Land Trust last year.

That organization has said it is committed to working with a new buyer and is open to discussing possible lease options to facilitate similar, non-motorized use of the land, including a ski area.

According to county information, the two buildings on the site were constructed in 1958 and 1975, but both have undergone extensive renovations over time, including construction of metal roofs to mitigate wildfire threats.

The property comes with water rights and piping for snow making.

The area has a varied topography, including flat and gently sloped areas near the base of the hill and mountainous terrain farther up.

With a down payment of $590,000, a credit score of more than 740 and a 30-year fixed mortgage, a buyer could own the property for a monthly payment of $12,668.99, according to Windermere Real Estate’s online listing for the property.